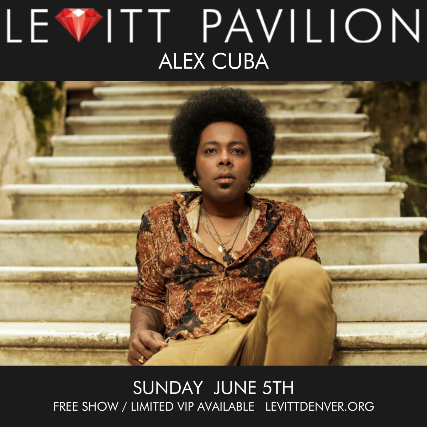 Alex CubaDOORS OPEN: 4:00pmMEMBER PRESALE: Thursday, March 10th - 10:00amVIP ON SALE: Friday, March 11th - 10:00amGA ON SALE: Thursday, May 5th - 10:00amMollys Spirits VIP Lounge: Everyone over age 6 must have their own VIP ticket to gain entry to the Mollys Spirits VIP Lounge. Please bring your digital or printed out ticket to the venue to gain entry and pick up your VIP wristband at the Levitt check-in tent upon arrival. VIP tickets are $35.00 per person and include the following:Access to premium viewing location in the VIP section1 FREE drink of choiceVIP bar access and separate bar lineLimited lounge seating (when available - you are encouraged to bring your own blanket & lawn chair to guarantee seating). FREE GENERAL ADMISSION TICKETS: General Admission tickets are one ticket per person. Lawn seating, no chairs are provided. Free ticket holders are asked to arrive at the venue by 20 minutes past showtime, otherwise your ticket may be forfeit? to walkup guests.______________________________________________Alex CubaHis sugarcane-sweet melodies, pop-soul hooks and powerful guitar riffs, relinquish a conventional stereotype that exemplifies much of the Latin music landscape.Born Alexis Puentes in Artemisa, Cuba, was immersed in music at a very young age, joining his fathers (respected guitarist and teacher Valentin Puentes) group of 24 guitarists.Alex then went on to study electric and upright bass and touring and recording nationally and internationally. In 1999, Alex moved to Victoria, B.C where he recorded an album titled Morumba Cubana alongside his twin brother Adonis, as The Puentes Brothers.Alex then went on to record his solo debut album Humo De Tobaco in which earned him a Juno award for World Music Album of the Year in 2006. In 2007, Alex released Agua Del Pozo which also earned him another Juno award for World Music Album of the Year in 2008.From there, Alex released his third album, a self-titled project Alex Cuba in 2009.The album features his first ever English track titled If You Give Me Love. The album gained recognition on an international level. In 2010, Alex took home the award for Best New Artist at the 2010 Latin Grammy Awards, where it was also nominated for Best Male Pop Vocal Album. It also followed a nominated for Best Latin Pop Album at the 53rd Annual Grammy Awards and in 2011