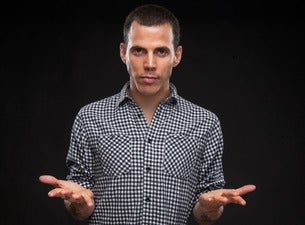 FOR ADULT AUDIENCES ONLY - this show contains graphic footage of Sexually Explicit Content, Nudity, Self-Inflicted Violence, & Drug Use. After failing miserably at the University of Miami, Steve-O was a homeless couch-surfer for 3 years before he attended Ringling Brothers & Barnum & Bailey Clown College, to help further his goal of becoming a famous stuntman. His relentless attention-whoring led to working with Johnny Knoxville on a stunt-based reality show. Since then, Steve-O has had continued success, as a New York Times best-selling author with his memoir, 'Professional Idiot', & he has established himself as a force in the world of stand-up comedy. He's thrilled to be releasing his new comedy special "Gnarly" direct to his fans at steveo.com. He's also got a weekly podcast called Steve-O's Wild Ride! He's been clean and sober for over twelve years now.